Originally developed as a project for one of my classes, I decided to take the concept behind Arithmatic and develop it into a full game. Players are presented with an arithmetic problem, and they are given 5 seconds to answer that problem, either by swiping or tapping the correct answer.

The menu screen requires users to swipe or tap on the option they want to go to. This interaction is identical to how users would interact with the app during gameplay. This was done to reduce the need for a standard tutorial and help users grasp the gameplay controls very quickly.

In order to help users quickly analyze and solve the problems being presented, I developed a color coded system where each function is represented by its own color: 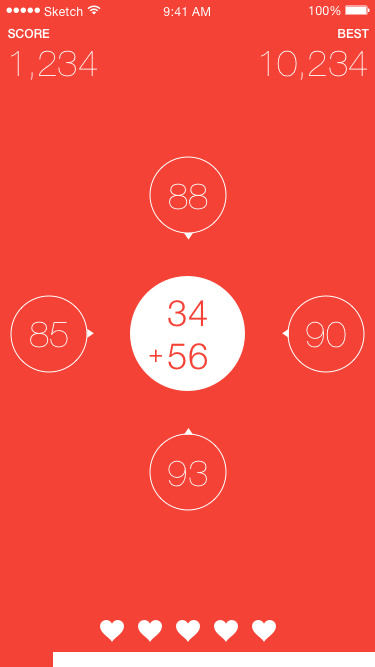 The monochromatic color scheme of the game makes the selected color truly stand out, and makes it all the more shocking when it’s Game Over and the screen turns to black.

The game also comes with iOS Game Center integration, so users can check their scores and compete with one another.

Unlocking the game for $0.99 gives players access to personalized user stats, where players can see their success rate and average score time, categorized by each function.

Wanting the feel of this game to be ‘just right’ I built a simple prototype version for web browsers using jQuery UI. The prototype was meant solely to plot the user interactions and really nail the look of the animations in game. Afterwards I handed it off to an iOS developer to have it built into a working iOS title available on the app store.

Be sure to check out the game here.